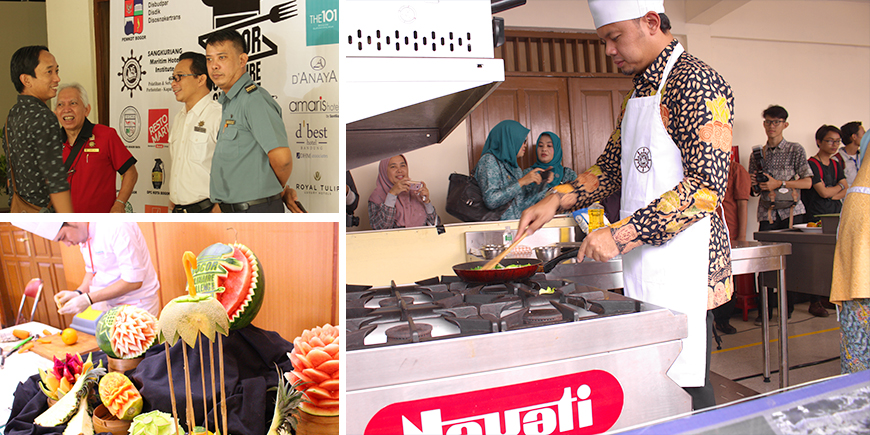 Bogor is one of the tourism city in West Java, well known with loads of culinary variations, starting from Roti Unyil, Bogor Pickles, Toge Goreng, and many more. To introduce the tourism interests especially from the culinary industry, the government of Bogor and Sangkuriang School of Hospitality create the cooking activity space for all chefs from Bogor and nearby area to join and to perform their creative cooking idea in Bogor Culinaire Challenge, the cooking competition event which was organized on Tuesday and Wednesday, 1 – 2 November 2016 at Bogor Women’s Building (Gedung Wanita Bogor), with a total participation of approximately 20 contestants.  During the speech, the mayor of Bogor, Mr. Bima Arya, expresses his excitement about this activity that could bring the spark of emergence and development of innovation and creativity of Bogor citizens in culinary industry. This event was also expected to be the first start up to encourage the people in exploring more about the food culinary either traditional food or modern food.

As the company which has the vision to give total solution for culinary community, Restomart supports Bogor Culinaire Challenge, the cooking competition event. This event was organized for two days and was fully supported by Restomart by providing Nayati professional kitchen equipment. This event was happened gloriously with total 8 sets of live cooking competition, participated by the chefs from various famous restaurants such as Giggle Box Resto & Café, Hotel D’Anaya, The Mirah and even Harris Hotel. It was not just the live cooking performance from professional chefs, the event was also occupied by cooking performance by the Mayor of Bogor, Mr. Bima Arya and his wife as well as Mr. Theo George, the chairman of Bogor Culinaire Challenge using Nayati professional kitchen equipments.